A big thanks to high school senior, Hannah Schaffner, who chose to receive donations for Children's Hope for her graduation tea rather than gifts!!!  Hannah asked friends to give a financial gift that would benefit the kids in Haiti.  I just love this idea!  Most Americans have so much "stuff" that our homes are overflowing so just adding to the pile seems pointless.  Using special events and occasions to benefit the "least of these" is a creative way to live out God's desire for His children to be a blessing!

In fact, someone recently suggested that individuals make a donation to Children's Hope in honor of a mom on Mother's Day instead of purchasing a gift.  Another great idea!  Of course it doesn't have to be Children's Hope - it could be the Caring Center, Sav-A-Life or whatever is special to a mom.  The point is to use our earthly resources for Kingdom purposes!


Posted by Childrens Hope at 10:02 PM No comments:

I know many of you are praying for Trent and Heather Beck as they are in Sofia, Bulgaria to bring Sellenn Rose home.  They have her now and are completing more requirements such as acquiring her passport, doctor appt. , in order to bring her home soon.  As you can imagine they have faced many challenges these past couple of days.  Sellenn is five yrs. old and all of a sudden everything about her life has changed from her bed to smells to food plus trying to figure out if she can trust her "parents."  Mix in the fact that she speaks no English and you probably get a small glimpse of these past few days.  Advice during these days in country usually is just to survive them and know things will begin to settle down some when you get home.  Please continue to lift them up in prayer.  I know they are very exhausted in every way and are running on adrenalin.  They still have the very looong trip home ahead of them.  I am so thankful for Trent and Heather's obedience to God's call.  No, it is not easy and they are sacrificing so much!  They would both tell us that Sellenn Rose is worth it.  What a reflection of God's love for us - He also says that we are worth all of His sacrifice and suffering and that "by His wounds we were healed."


A new little girl was brought to Children's Hope, Jacmel about two weeks ago by Social Services.  All I know is that her name is Fedline and she was physically abused by her stepmother.  Tommy has been trying to get more information.  She is very shy and quiet but seems like she has warmed up to Tommy according to the picture above.
Tommy reported that from a three day revival at Pastor Paul's church, 150 folks came to know the Lord!!!  Wow, please pray for Pastor Paul and the other church leaders as they follow up with them and begin to disciple them.  A team from FBC Decatur is in Jacmel this week.  They spent some time working on Pastor Paul's church.  Tommy announced Sunday in church that the team needed many church members to show up to help with the new floor.  Well, 40 members showed up and worked 12 hour days.  In the picture above you will see how they set up a relay system in order to bring in material for the floor.  We are blessed beyond measure just to be part of what God is doing.  Praising Him for allowing CH to even exist!

Posted by Childrens Hope at 11:43 AM No comments:

Trent and Heather Beck first met their daughter, Sellenn Rose, in November 2011 in an orphanage in Bulgaria.  They were able to spend several days with her but due to Bulgarian adoption law, they had to leave her behind with plans to return to Bulgaria in 3 - 4 months to bring her home.  They have been waiting with much anticipation for this second trip to Bulgaria and they will leave this Friday, April 20th and get Sellenn Rose on April 22nd!  They are excited beyond words, because they will finally bring home this precious child that God chose just for them.  They have been praying for her, her caregivers, bonding and attachment issues, the language barrier, and on and on, but they know that without a doubt that God has called them to adopt Sellenn Rose.  They will be her family regardless of issues and challenges they may face.  Sellenn Rose will go from being a family of one to being part of a family that includes not only parents but grandparents, aunts, uncles, cousins, and a church family.  Once again, it reminds me of how God adopted me into His family.  Please be praying for the Becks as they make this trip and all of the changes they face and that Sellenn Rose would feel a sense of trust and security with them. 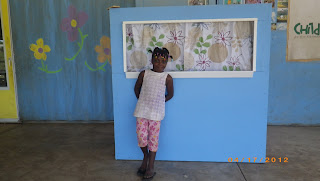 As many of you know Charley Elgin returned to Montgomery to be with Martie during her hip replacement surgery and recovery.  Charley has an extraordinary friend in California, John Turnbull.  He emailed Charley without being aware of Martie's surgery and said he was "homesick for Haiti" and when could he come back.  Charley saw this as God's provision for him to be home with Martie but yet the work on Children's Hope in Jacmel could continue.  John agreed to go to Jacmel a few days before Charley left for the States to get up to speed on what needed to be done.  He agreed to stay around a month in Charley's absence.  He has done a tremendous job and we are so grateful to him and our Lord for providing just the right person at just the right time.  John also found time to complete a request of mine in building the puppet theater above.  This will provide a fun way for mission to teams to share Bible stories with the kids and hopefully, the kids will be putting on stories for other kids in Jacmel.  Thanks John for being alert to the Holy Spirit's prompting and being obedient.  You are a blessing! 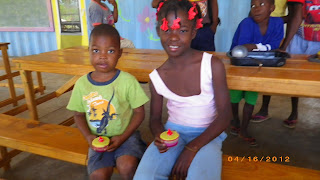 Tommy returned to Jacmel last Friday after being in Decatur and Montgomery for a week.  Joy is in Florida waiting on their second grandchild to be born.  In January of this year, Joy and Tommy started a tradition with the kids.  Whenever one of the children have a birthday, they celebrate by eating cupcakes.
Tommy made these cupcakes for Lovenson and Elida's special day.  Thanks Tommy for all the many hats you wear with Children's Hope! 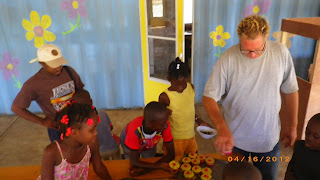 Posted by Childrens Hope at 10:13 PM No comments:

Decatur FBC has been very active in Jacmel through the State Bd. of Mission from the beginning.  They have sent several teams to Jacmel and plan to send others.    In order to get their children's dept. involved with Children's Hope they decided to have a pajama party where the Decatur kids could "adopt" a child from the orphanage in Jacmel.  They printed large pictures of the children with their names, DOBs and story.  The Decatur kids were encouraged to love and pray for this new "sibling" as if he/she were living in their home.

The second phase of getting their children involved included raising money for Project Build-A-Bed for Children's Hope.  Children age 2 through 6th grade made items to sell to the Decatur church family.  Preschoolers made hand print pillowcases and 1 -6 graders made blankets.

The third phase of Project Build-A-Bed was their Haitian Marketplace where the kids sold the pillowcases and blankets.  The kids also had market booths where they did crafts and projects that were all related to Haiti.

We are so grateful to FBC Decatur for partnering with us as we serve in Haiti.  Also, thanks for getting your children involved in learning about the needs of orphaned children and then leading them to help meet those needs!  It is such a privilege to be part of God's Family!


Posted by Childrens Hope at 9:58 PM No comments: 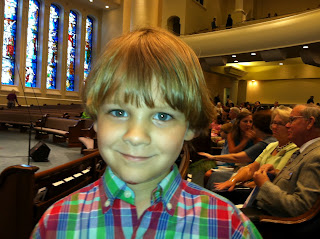 I read recently on FB about how Webb collected cans and sold them making around $25.00.  I remember thinking that he would have a fun time spending his hard earned money.  Then on Sunday morning, Webb and his dad, Tommy, presented me with an envelope with $25.00 in it.  Webb wanted all of his can money to go to the orphans in Haiti!!!  Needless to say, I was awestruck  by his selflessness and desire to help orphans.  He also affirmed that FBC/CH is making an impact in advocating for orphans.  I am faithfully trusting the Lord to raise up the children of FBC to have a passion for orphans and to realize their responsibility in caring for them.  If Webb is any indication of this, we are well on our way!  Praise the Lord for Webb's heart and the teaching of his parents.
God is also providing the funds for Phase II of Children's Hope, Jacmel.  One family in our church is leading the way of building a home for a young lady who died from cancer as a teenager.  The home will be built and named in her honor.  Everyday, we see God's provision over and over.  Please join us in praying and giving.
Posted by Childrens Hope at 8:15 AM No comments: