Sorry I haven't posted for awhile but that doesn't mean things haven't been busy.  Martie and Charley were reunited on Tuesday of this week in Jacmel - yay!  It is a hard thing to be separated for that long!
Donna Conte from FBC, Mtg. was able to travel with Martie and is spending a week in Jacmel.  Tommy and Joy are doing well and will be traveling back to Montgomery on Dec. 3 and will be in the States until Jan. 2.

Andy and a small team (Beth, Carrie and Emmalyne Phillips, Mark Williams and daughter, Claire) arrived safely in Jacmel today.  There is also a vision team there from Gateway BC.  Andy carried down the first of many uniforms for the students at the church schools.  The sewing circle at Taylor Road needs lots and lots of help making these uniforms so please let me know if you have some extra time.  You do not have to sew, because they need folks who can cut out patterns and iron.  Several other churches have plans to help out but, we still need others.  Making over 1200 uniforms is a major undertaking!!!

Construction at Children's Hope in Jacmel is well on its way as you can tell by the pictures below.  It is a rare site to see this much metal in Jacmel or anywhere in Haiti actually.  In fact, it is causing quite a bit of attention.   Charley decided on this method rather than block because it cost about the same but goes up faster and should be stronger.  It is quite exciting to watch the homes being built. 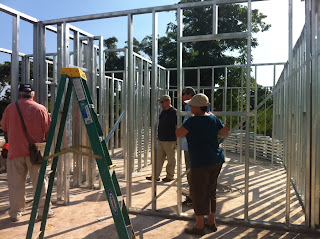 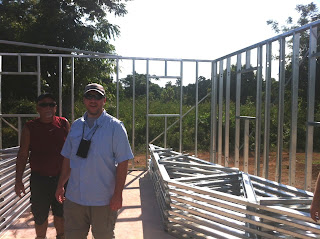 Another blessing that has come our way was a very successful Art and Crafts Show this week in Montgomery.  Sara Denney, Natalie Stanley and Eegee Williams began to have a vision for this project after a trip to Jacmel in September of this year.  They asked for donations from artist and crafters throughout the Mtg. region and many people responded.  The Art Show raised around $4300!!!  Thanks so much to these dedicated ladies for all of their hard work, time and sacrifice.  They are big encouragers to CH!

The big hit of the Art Show was from a newly discovered talent:  Mary Evelyn Amster who is in the 5th grade and a member of FBC, Montg.  Mary Evelyn began painting these ornaments this week for the Art Show and really couldn't paint enough to keep up with the demand.   At last count, I believe the sale of the ornaments was over $500.  A big thanks to Mary Evelyn for using her talents to help orphans and to her mom, Ann, who drove all over town making many trips to purchase ornaments. 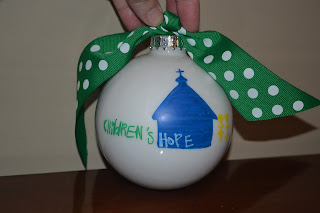 Posted by Tanya Birchfield at 8:27 PM