In my last email, I shared pictures of school uniforms but forgot to write about them.   Despite many challenges, the sewing clinic has been a huge success!  Thanks to Charley and John Turnbull who have really hung in there with this project; they have showed much patience and dedication.  I can't begin to tell you all of the little details that go in to making this work not to mention some really big details.  But it is working and working well.  These ladies who had never held scissors two months ago are producing lots of uniforms for the kids at CH and doing a good job!  I want to share an email from Charley that shows how God is using the center:

After Tropical Storm Isaac had passed Jacmel, virtually all of the women who work at the sewing center had lost their homes (tents actually) to the storm.  The next Monday morning, they came to work in spite of their loss.  We sent them home, telling them they needed to take care of their families and we would still pay them.  The next day they came back.  The next day they came back and they all had the same shirts on. Showing us that they were a team ...

My point, these women have gone from no hope to pride in their work and themselves.  Those are intangibles, but speak to the whole point of this particular aspect of our ministry.  Giving Hope to people who had no hope.

Another story ... there is an orphanage in Jacmel that has 19 girls ... most are school aged.  They have no means of providing uniforms for the girls so we are going to make the uniforms for them.  Those same women are making a difference in the lives of those children ... giving them hope as well.  2 Corinthians 1 says that God is the God of all comfort who comforts us in our affliction so that we might comfort others with the same comfort that we ourselves have received.  That is what is happening here.  Scripture is being lived out .... Bondye Bon ... God is good!


Also, I mentioned that Nicole had fallen out of the lower bunk (still questioning if there may have been a little more to that story from Nicole) and broken her clavicle.  John took her to the hospital.  They x-rayed and set it but said the "bone" doctor would not be there until Saturday (this was Monday).


Charley suggested John take Nicole to the Cuban hospital outside of Jacmel where the doctors are better trained instead of waiting on the Ortho doctor to come on Saturday.  Here is Nicole at that hospital getting her cast reset on Tuesday. 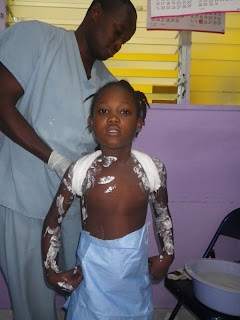 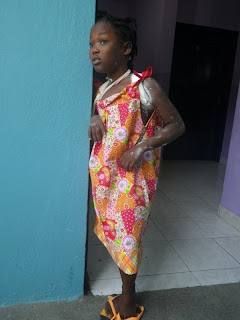