As most of you know Children's Hope is partnering with the AL Baptist Children's Home (ABCH). A lot of folks think ABCH is just involved in residential homes but they also license and oversee foster homes as well. Through our partnership, they have expanded to Montgomery and hired social worker, Bobbi Olson. Bobbi will work with our FBC families who commit to becoming foster parents. She will also work with other churches in the area recruiting families to become involved in foster care. The next 10 week foster care training class will begin in Feb. 2012. It is not too early to sign up! 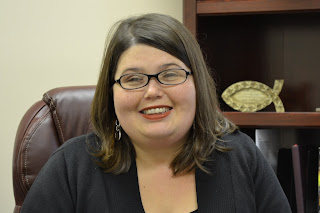 Bobbi worked with Etowah County Dept. of Human Resources in several areas including foster care for about seven years. Her family moved to Prattville about five years ago. During that time, she did some contract work that allowed her to stay home with her children who are now 9 and 11. Her husband, Matt, is an accountant with the Retirement Systems of Alabama. Bobbi's office is at the Montgomery Baptist Association. We are so thankful to the MBA for partnering with us as well.
We also have news from Children's Hope in Jacmel. While we "said" we were not taking any additional children, a dire situation was presented to us. A ten year little girl lost her mother a while back and her father committed suicide recently. She was at risk of becoming a restavek which is basically a child slave in Haiti. She moved in with the other 18 children and started school this last week. Her name is Estephanie but goes by Nana. I will get pics as soon as possible.
Montgomery has a new law firm in town and it is called The Adoption Law Firm. Sam and Mary Beth McClure adopted Robi from Hungary in 2010. Sam felt called to open this firm and concentrate on adoption work. The McClure's are a Godly couple with a passion for orphaned and vulnerable children. See his website at www.theadoptionfirm.com or contact him at 334-612-3406 or sam@TheAdoptionFirm.com.
Finally, I wanted to share a picture of one of our neighbors in Jacmel. This is the cow that spends the day at Children's Hope. I think we can all agree that he needs a little fattening up! 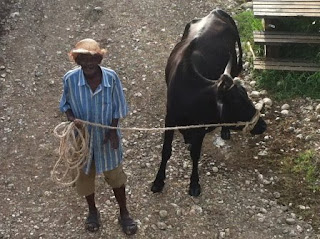 Posted by Tanya Birchfield at 2:33 PM