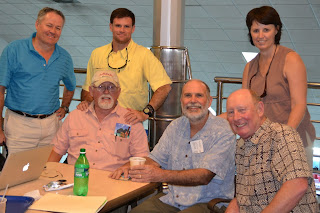 This picture was taken at the airport in Port au Prince as we were waiting on the plane to Miami. I had the privilege of being in the company of five Godly men and would like to tell you a little about each one of them. First, Rob Birkbeck is on the left. Rob was born in Zambia but now is a US citizen living in Orlanda. Rob travels all over the world as a free lance get it done guy for different ministries. He has done everything from smuggling in Bibles to setting up evangelism opportunities in the Ivory Coast. However, his greatest challenge was adopting a six year old relative with Reactive Attachment Disorder. No matter how difficult this became, Rob and his wife hung in there and never stopped loving him. They have truly been the hands and feet to this young man.

Then there is Andy! For those of you who know him, you know he is a man of integrity that loves the Lord with all of his heart! Andy continues to amaze me with his energy and willingness to sacrifice for others. I am thankful for his spiritual leadership in our home and for the special gift that God has given him to teach the Word.

Next, Charley Elgin is a man walking closely with the Lord. It doesn’t take long being around Charley to know that he is surrendered to the work of the Lord. He takes his calling very seriously and God has granted him much wisdom and faith. We continue to marvel over God allowing our paths to cross!

Finally, Doug Moyer and John Turnbull are sitting by Charley and both are from California. They first met Charley in Waveland, MS about five years ago and they formed a strong bond of friendship. This was the second trip to Chilren’s Hope, Jacmel for both Doug and John. Doug is a pastor with a strong background in construction. He radiates God’s love and compassion.
He and his wife have two children who were adopted as babies! As Doug relayed this story to me, it was evident that God had orchestrated every detail.

John has such a pure and loving heart and his actions and words are a reflection of His love for the Lord. It doesn’t take long to realize that John’s motivation to serve is genuine. John is originally from Scotland and still has a hint of an accent. He carves Noah’s arks and his wife, Debbie, paints them (www.mendocinoark.net).

Andy and I are so humbled that all four of these men gave of their time during the Christmas season to be in Jacmel. Rob facilitated the acquisition of the land; Charley laid the ground work for a construction team coming in Jan. and beginning of Phase II; and Doug and John completed construction projects. We praise the Lord for them and their willingness to serve!!!

Posted by Tanya Birchfield at 12:40 PM